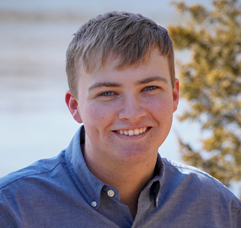 As a young teenager, Corbin Kruser loved jet skiing and motocross. His curiosity and mechanical aptitude eventually led him to start making his own parts to support his hobbies. As soon as high school allowed, Corbin joined the Advanced Manufacturing with Robotics and Welding Career Academy at Kirkwood Community College. Kirkwood offers several career academies as a way for students like Corbin to experience hands-on learning and skill development while still in high school. These fast paced and highly technical classes sealed the deal for his future.

“I initially joined the academy because I wanted to learn to weld. We started with welding in class and then moved into the CNC (Computer Numerical Control) Lathe and Mill Operating portion of class. Once we got into learning to use a press brake as well as learning about all the trades in the shop, I knew this was meant for me,” said Kruser.

CNC programming is the process of making a CAD model on a computer and then translating that model to a machine that produces it. It was that highly technical process that allowed him to make his own hobby parts.

Kruser graduated a semester early from Marion Independent High School to enter the working world full time at Crystal Group. “I’m a CNC Operator at Crystal Group, setting the machine up and making parts run. I want to get into CNC programming and work my way up.”

Earlier in 2020, Kruser received a call from Marion Independent High School Counselor, Tom Kettman. Kettman shared with Kruser that there was a partnership opportunity through Community Promise that might help give him an extra boost as he pursues a professional career. “If not for Mr. Kettman, I wouldn’t have realized the meaningful potential Community Promise had in store for me,” said Kruser.

Kruser was an excellent candidate for the first Community Promise Grant ever awarded in the community. These grants exist as a community investment to support partnerships between a student and business. They fill financial gaps and support specialized certifications or career training. For Kruser, the grant helped him to acquire tools needed for him to continue to advance in his field. He is required to supply his own tools for his job at Crystal Group, many of which were borrowed from family and friends. While Kruser was fortunate to receive intensive internal training paid for by Crystal Group, he was still in need of his own tools to adequately do his job well.

“This grant will allow me to get a boost in the right direction. It’s really helping me move forward in my career,” said Kruser as he remarked on the impact of receiving a Community Promise Pursuit Grant.

“We were pleased to offer this grant to Corbin and look forward to seeing him progress in his profession,” said Emily Russ, Workforce and Communications Specialist for Marion Economic Development Corporation. “We’re positioned to invest in more local students who have identified a clear career path and are ready to partner with a local business and our growing community.”

Eligible students can learn more about Community Promise and grant opportunities at www.communitypromise.org.